This write up contains a plan for progression and extensive ways of how I can make fitness fun in my digital application for the Department of Health brief.

Reading up on some fitness tips, focusing on how to make it fun. I've made some interesting findings that could help to shape the app that I am going to create.

The brief is aimed at people who don't exercise. I don't think it's important to be specific at this stage - there's no need to go into detail about weight exercises, muscle groups, how to beef up etc. as it's not really necessary for beginners. There's existing apps out there that accomodate for weights specifically, a list is featured on the website below:

That being said, I think the important thing is to focus the project down to exercise that is immediately accessible, at the lowest cost possible. This includes jogging, hiking and biking - others are listed below but at varying costs.
Another important aspect of encouraging fitness is to make it social. It could encourage parents to take part in activities with their children, or it could introduce competition over close friends. It shows people that they're not alone in the world of fitness, and by having other people there to share the pain would make it more likely for users to enjoy working out, and therefore more likely for them to stick to their fitness plan.

Sports clubs are plenty and are a great way to have fun whilst also working out. Local clubs could be pointed out to users, based on their location and tailored to their preferences.

Starting slow is also important. If users are told to exercise more than they can handle, they will burn themselves out and that can be very discouraging - especially if they find they can only run for a couple of minutes. Introducing achievable goals with more than realistic deadlines will give users something to aim for, and by time the deadline passes they could find that they have more than surpassed the goal - making it even more satisfying.

Eventually, there could be one overarching goal that the user could aspire to, for example a marathon or a race. Giving them access to their own donations page would also encourage the user to take part in these charitable events.

The goal could be, for example, to lose 1lb in a month. The user may only take 2 weeks to reach this goal, but when the deadline comes it could turn out they have lost 2 or even 3lbs, which would give the user satisfaction and would encourage further exercise.

Another important thing to communicate to beginners is not to overtrain - it is likely to do them more harm than good and will demoralise them during exercise. This needs to be communicated in the app.

Stimulating the senses can make running and other forms of exercise more enjoyable. Music and even television on a treadmill are ways to achieve this. For example, if a user is into football, the application could encourage him to visit the gym while the game is on. He/she doesn't need to go hell for leather throughout the entire game, but two 45 minute workouts with a 15 minute interval will do them a world of good considering they would be sat down watching it anyway. Music playlists could also be encouraged.

Another idea could be to make it into a social media platform - encouraging interaction with friends and posting high scores onto a leaderboard. This would be where I could implement the 'game' side of the application. Users could post their sports interests so it would make it easier to organise games between friends.

Keeping track of progress is key to encouraging continuing exercise. Regular photographs, on a monthly basis, would give the user a visual indicator that they're improving their fitness. It could also backfire - if no progress is made in a month it could demoralise the user. Info-graphics could help to display their best running times and show them that they're getting fitter - even if there is no visual proof.

I could implement the GPS system to track their exact time and distance covered, which would also help to show progress. Each run would be backlogged and their best times would be featured as one of the main pages - similar to a treadmill but in the real world.

The system would be designed so if they cheat, they're only cheating themselves. This would be less apparent if there was a social media side to it, but in the basic application there would be a lot of manual input - for example weight input and personal goals.

A lot of initial ideas, but they can be simplified. Here's a list of the topics covered so far that could be transferred into pages of the application. 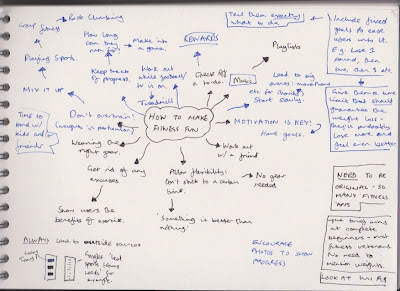